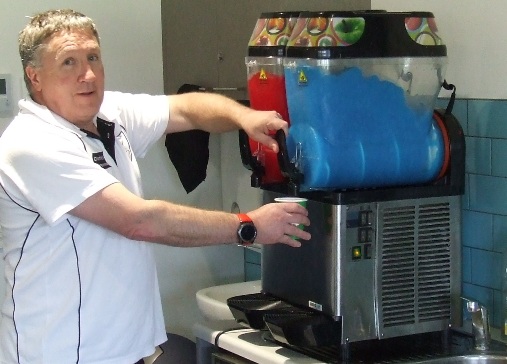 Moonee Valley players, family and supporters got together on AFL Grand Final day to cheer on the winners and the losers, in our first function in our new pavilion.
It didn't matter who won or lost on the big screen - we were all winners in our grand new home at Ormond Park.
More than three dozen people attended across the day, and our "trial run" of the new facilities shows there will be plenty more on offer.
It was a good fundraiser for our Club this early in the season.
Thanks to the Mr Quick Whip company, which donated the use of a slushie machine which proved popular with the younger supporters - and also with the adults when the cups were topped up behind the bar.
Above right: Peter Golding took charge of the slushie machine at the GF Day.
Thanks to Vice President Mark Gauci for organising with Mr Quick Whip for the machine.
Thanks also to Joshua Gorry for organising a meat sponsor for the day, and for also organising the Beer of the Day promotion at no cost to the club.
And finally thanks to Channa DeSilva and Nick Brelis for their time on the barbecue and in our flash new-look canteen, and for Peter Golding, Kevin Gardiner and others in the bar.
The Grand Final function came after a solid Saturday morning training session with coach Tony Gleeson, which saw about 30 players out on the track and putting in the effort in the lead-up to the season start.
If the hard training session and the cameraderie at the function are any indication, we're primed for a good season.
**More photos HERE