Heart-felt thanks from the Walker family 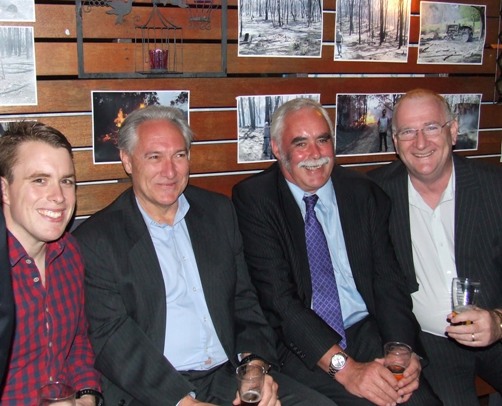 THANKS FROM THE WALKER FAMILY

Club president Charlie Walker and his family wish to thank everyone from the Moonee Valley Cricket Club for their support after the Lancefield bushfires in October.
Charlie, cricketing sons Murray and Nigel and former cricketer wife Adele thank everyone who attended the cocktail night/fundraiser at the Laurel Hotel in Ascot Vale on November 21, and others from the club who supported the raffles, auction and tickets.
The family's property was badly damaged in the big breakout in the Cobaw Ranges on October 6, following a controlled burn in the forest by the Department of Environment, Land, Water & Planning.
They lost a shed, almost 500 cubic metres of firewood, tractors, a log snigger, bulldozer, other vehicles and equipment, 7.5km of fencing and about 500 acres of forest.
Above: From left - Nigel Walker, his big boss Rod Wilson, Charlie Walker and Jim Tennison swap stories.
Charlie tried every trick to get his mates out of cricket retirement, but they were wary of committing.
"I was really moved by the way our friends at the Club came together and organised this function to support us," Charlie said.
"Even though we're confident that we will receive adequate compensation for the losses, the support and concern of our friends really demonstrates why Moonee Valley is such a great club."
***For more pictures from the night, click HERE